The Lionfish Photo Exhibition has been completed

Discussion on lionfish experiences from the Atlantic and the Mediterranean

November 12, 2020
The Lionfish Photo Exhibition in Cyprus started on the 2nd of October 2020 and it was completed on the 9th of November 2020. Photos and information displayed in the exhibition presented the lionfish and the project’s actions to tackle its invasion in the Mediterranean, especially in Cyprus. The photos presented lionfish in the natural environment of the seas of Cyprus, where they were spotted by partners of the “RELIONMED-Life” and by divers of the project’s “Removal Action Teams (RATs)”. The “IUCN MedMIS” portal, where people can upload reports on lionfish sightings to help monitor the abundance and distribution of lionfish in the Mediterranean, was also presented during the event. In addition, the public found out ways in which they can use lionfish and as a result help control the populations of the species in the area. It can be used both in households and by local market niches. Lionfish is an edible species that is also tasty and nutritious, while its soft fins can be used to create jewelleries and other works of art.
The event started on the 2nd of October 2020, close to the seaside near the Paphos castle. On the 9th of October 2020, the exhibition was moved to the Finikoudes area in Larnaca. Later, on the 16th of October 2020, the exhibition travelled to Limassol - opposite the café Nero in Molos. Finally, on the 23rd of October 2020, the event was transferred to the central square of Paralimni, where it remained until the 9th of November 2020. As of the 1st of October 2020, the exhibition was presented online as well, at https://relionmed.eu/lionfish-photo-exhibition/, where it remains until today.

The exhibition by “RELIONMED-Life” was organised with the assistance of the companies “A. APPIOS COMMUNICATIONS LIMITED” and “BPRarts Cultural Management”. Photos used were taken during actions and events organised by the project, but also photos that were provided by members of the “Removal Action Teams (RATs)”. We would like to thank the “Lighthouse Surf & Turf” Restaurant in Limassol, the “Neldi Art Gallery” in Paphos and the “Spectrum Studio” for participating in the project’s actions that were presented in photos of the exhibition. A big thank you to the “RATs” members whose photos were shared during the event - Mr. Costas Constantinou (Seawater Underwater Photography), Mr. Athanassios Lazarides and Mr. Pantelis Kranos – and to all other volunteers who once again supported the project. We also thank the Municipalities that hosted the event in their cities and everyone who visited the exhibition.

The event was outdoors and open to the public, therefore, it was a great opportunity for everyone to get informed about the lionfish issue and how we can help. We hope you enjoyed the event and that you have found the information that accompanied each photo interesting and useful. Share the information and the link to the online exhibition, to let others know about lionfish and how we can help the marine environment and the socio-economy of the Mediterranean. 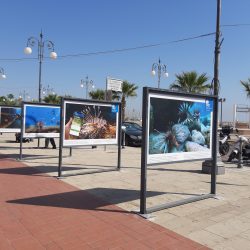 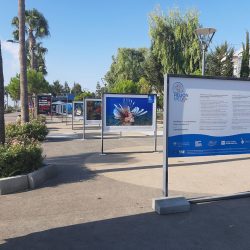 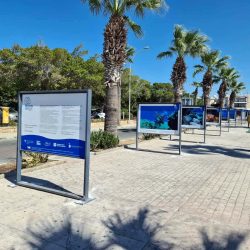 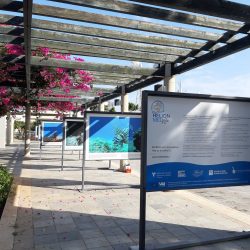 Locations, where the exhibition was presented in Cyprus, are shown on the map below