June 19, 2021
The European Maritime Day (EMD), which celebrates the Sea, was held for the first time in Cyprus between the 17th and 21st of June 2021. The event took place in Larnaca and through different activities that were available it was aimed to educate the attendants on the significance of the sea and the security of its environment. The event was organised by the Cyprus Marine and Maritime Insititute (CMMI) along with the Municipality of Larnaca, the Phivos Stavrides Foundation, the Youth Board of Cyprus, the Youth Makerspace Larnaka, the Larnaka Tourism Board, the Larnaca Cultural Foundation, the Cyprus Marine Environment Protection Association (CYMEPA) and the Maritime Institute of Eastern Mediterranean (MarInEM). It was also supported by the European Commission, while other sponsors and organisations contributed as well. The RELIONMED-Life project participated with its video shots about lionfish – they were displayed on an emblematic building near the CMMI House. Workshops, seabed and beach cleaning, musical performances and cruises were some of the other activities that formed the event.
For more information on the event, click here. 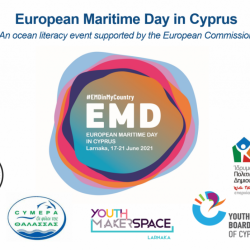